Home
>
A beginner’s guide to craps 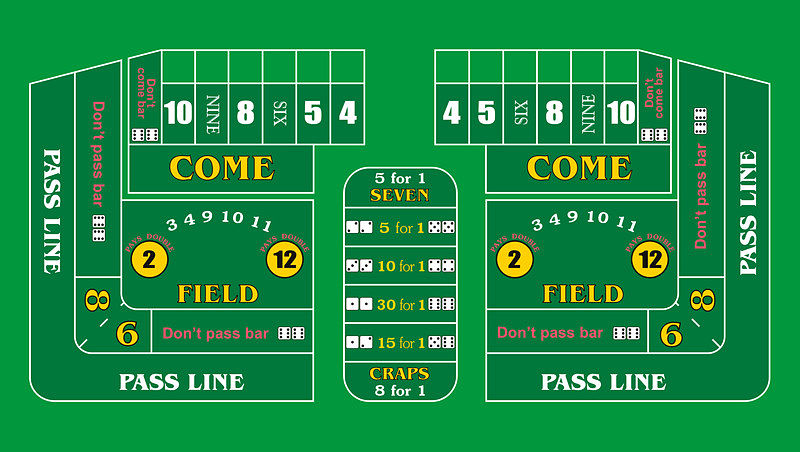 You’ll definitely want to learn how to play craps if you’re planning on a visit to the casino. It’s one of the most popular casino table games and with good reason. You’ll often see crowds of people round the craps table whooping and hollering as they take it in turns to roll the dice. It’s a great game to play but it can seem confusing and intimidating to newcomers as it’s such a fast-paced game and there are so many different ways to bet. Here’s a beginner’s guide on how to play craps…

How to play craps

Despite how mystifying it can seem if you’ve never played it before, it’s not actually all that hard to learn how to play craps. Indeed, the basics are really easy to understand. It all starts with the shooter…

The players take it in turns to roll a pair of dice on the craps table. The player who’s turn it is to roll is called the “shooter”.

The pass and don’t pass lines

The shooter then rolls the two dice. This first roll of the dice by a particular shooter is called the “come-out roll”.

If the shooter rolls either a 7 or an 11, the pass bets win right away and the don’t pass bets lose.

However, if the shooter rolls a 2, 3 or 12 then the don’t pass bets win right away and the pass bets lose.

If the shooter rolls any other number, that number then becomes what is called the “point”. Neither pass bets nor don’t pass bets are paid out at this stage.

The same shooter will now continue to roll the two dice until they either roll the point number again or roll a 7. What happens next depends on whether they hit the point or a 7:

That’s the basics of craps in a nutshell and all you need to know to start playing. Take a look at a craps table though, and you’ll see it looks very complicated. That’s because of all the extra bets you can place if you so choose. Let’s take a look at some of those now…

The Odds in craps

In craps, “the Odds” doesn’t refer to your chances of winning. Rather, this is a side bet that can only be placed once someone has rolled the point.

Unusually for a casino bet, a bet on the Odds is exactly fair. That is, there is no house edge as the odds of winning or losing are exactly even.

You can also bet against the Odds. This is referred to as “laying the Odds” and in this case you’re betting that the shooter will roll a 7 before they roll the point again.

Another bet you can place once a point has been established is the “come” bet. You place a come bet by placing your chips on the Come space on the table.

If the original point number is rolled again by the shooter, any come bets you have made remain in play (apart from if your come bet is on the point number). You can now place another pass line bet too.

There is no limit on the amount of come bets you can make.